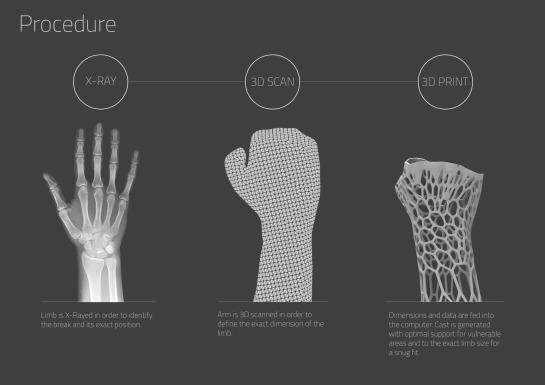 Over the last couple of days there have been a several articles that I’ve read that have made me think “you know, the 21st century, we’re really here aren’t we”.

One of the first that caught my eye was of a new innovation by a gentleman called Jake Evil….I know! Really…he needs to be working from some secret tropical island volcano base doesn’t he. Joking aside Mr Evil (I so wish he had a doctorate) has come up with a great new way of providing a cast for broken bones that doesn’t involve lots of plaster and people writing rude messages in indelible ink.

As in traditional treatments the limb is first x-rayed to determine where the break has occurred. It’s then scanned to create a precise 3D model which can then be used to create a 3D printed lattice from durable plastic that clips in place and exactly fits the patients limb.

The plastic lattice looks very sci-fi. It’s almost honeycomb structure allows plenty of air to the limb preventing any itching and is far easier to clean allowing the patient to shower and wash without having to worry about getting a cast wet. Let’s hope the Cortex Exoskeleton hits our hospitals before any of us break anything!

Another article that caught my eye was the unveiling of a new truck design by Hanover based MAN trucks. MAN have radically veered from the path of traditional truck design by attempting to create a truck with the aerodynamics and overall wind resistance of a car. They report that this will reduce both fuel consumption and CO2 emissions  by a staggering 25%. In today’s environment with fuel costs so high that’s a significant impact on a company’s bottom line. As we move more and more to other forms of propulsion such as electric this translates into more miles on a single charge.

What caught me about this more than the aerodynamics though was the similarity to the design of this truck and the sci-fi comics I was reading when I was in my teens. I’m constantly challenged now by what a very exciting present we live in and how we are making the future ours. I can’t wait to see what the next 20 years of the 21st century will bring!