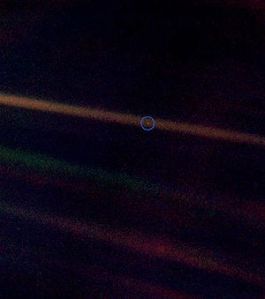 Earlier today I was having coffee with our village curate and as is normal our discussion ranged across a wide range of subjects from the history of the fall of Jerusalem in AD 70 to a picture I remembered having seen and the associated quote. As Voyager left our solar system for deep space it turned and took a sequence of pictures; in one of these, the one above, you can see the planet earth as it appears from about 6 billion kilometers away caught in a reflection of light rays from the sun through the camera’s optics.

Carl Sagan in his book “Pale Blue Dot: A Vision of the Human Future in Space” said this about the picture:

“From this distant vantage point, the Earth might not seem of any particular interest. But for us, it’s different. Consider again that dot. That’s here. That’s home. That’s us. On it everyone you love, everyone you know, everyone you ever heard of, every human being who ever was, lived out their lives. The aggregate of our joy and suffering, thousands of confident religions, ideologies, and economic doctrines, every hunter and forager, every hero and coward, every creator and destroyer of civilization, every king and peasant, every young couple in love, every mother and father, hopeful child, inventor and explorer, every teacher of morals, every corrupt politician, every “superstar,” every “supreme leader,” every saint and sinner in the history of our species lived there – on a mote of dust suspended in a sunbeam.

The Earth is a very small stage in a vast cosmic arena. Think of the rivers of blood spilled by all those generals and emperors so that in glory and triumph they could become the momentary masters of a fraction of a dot. Think of the endless cruelties visited by the inhabitants of one corner of this pixel on the scarcely distinguishable inhabitants of some other corner. How frequent their misunderstandings, how eager they are to kill one another, how fervent their hatreds. Our posturings, our imagined self-importance, the delusion that we have some privileged position in the universe, are challenged by this point of pale light. Our planet is a lonely speck in the great enveloping cosmic dark. In our obscurity – in all this vastness – there is no hint that help will come from elsewhere to save us from ourselves.

The Earth is the only world known, so far, to harbor life. There is nowhere else, at least in the near future, to which our species could migrate. Visit, yes. Settle, not yet. Like it or not, for the moment, the Earth is where we make our stand. It has been said that astronomy is a humbling and character-building experience. There is perhaps no better demonstration of the folly of human conceits than this distant image of our tiny world. To me, it underscores our responsibility to deal more kindly with one another and to preserve and cherish the pale blue dot, the only home we’ve ever known.”

I suggested to our curate that there were probably several sermons in this particular quote but I suspect that if there is one lesson to learn from it then it is not to take yourself too seriously. 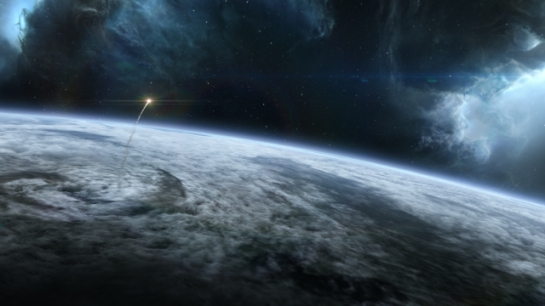 Ever since we realised that space travel was possible mankind has been intrigued by what has become known as the Fermi paradox. In 1950 Enrico Fermi posed the question in an informal discussion on the subject of extra terrestrial civilisations (ETCs) “If they exist, where are they?”. To bring this a little more into today’s context, we now know that rather than being an exception, planetary solar systems seem to be the norm in our neighbourhood.

To date 891 extra solar planets have been discovered including 262 that might be habitable. Planets are identified by looking at the light from a star and searching for transits or more specifically, the dimming of a star caused by a planet passing in front of it from our viewpoint.

So if there are all these potentially inhabitable planets out there in our galactic neighbourhood, why hasn’t anyone come to see us or at least said “Hi!”?

Until now The Search for Extraterrestrial Intelligence (SETI) project has looked for ETCs using radio telescopes. Other than the now famous “Wow!” signal picked up in 1977 by the Big Ear Radio Telescope at Ohio State University, we haven’t heard a peep out of E.T. However, radio frequencies may not be a great way to look for ETCs. We assume that because we use radio frequencies to communicate then CETs would as well. This may be entirely erroneous for a couple of reasons:

– Radio frequencies travel at the speed of light and as such, aren’t a great method for communicating over stellar distances because a signal from the nearest star other than our Sun would take years to arrive.

– Civilisations may only use radio frequency communication for a very short time during their technological development. The chances of us just happening on that period in history during which they’re using that form of communication are probably infinitesimally small.

The Colossus telescope is interesting because it will look for variations in the infrared spectrum which indicate the thermal signature of a civilisation. In other words, people use power and this power can be seen from space as heat. The problem is that this thermal signature is really hard to pick out with current technology because the heat of the host star tends to mask it. Build a big enough telescope with powerful enough optics and some very clever software and you can disentangle the planet’s thermal signature from that of its host star. If a planet has an unusually high thermal signature it’s good evidence that an ETC may exist on its surface. As the technology progresses we might even be able to see the distribution of heat across the planet’s surface.

The only snag is that building a football sized telescope costs quite a bit of money…around a billion US dollars. So whether Colossus ever gets enough funding remains to be seen. If it is ever built though, the resulting data could at last provide us with evidence as to whether or not we’re alone in the cosmos.

You know, when it comes to other planets it would seem that there’s always someone with too much time willing to come up with a conspiracy theory. The latest involves a rock photographed by the NASA Curiosity Rover in a region on Mars that has been named “Yellow Knife Bay“.  A keen UFO enthusiast was trawling through 100’s of NASA Curiosity pictures when he discovered a picture with a rock central frame that does bare a startling resemblance to a rodent of some description. Theories of the nature of the rock ranged from a fossilized mammal  to a bizarre NASA experiment to see how long a  rat could live on Mars.

Sadly, and much to the chagrin of ufologists, the rock is just…well…a rock. Seeing forms we think we recognise in seemingly mundane objects happens due to a psychological phenomena known as pareidolia. It was proposed by Carl Sagan that human beings are hard wired to see forms we recognise in random patterns. From a survival perspective this is potentially a very useful trait, the thing lurking in the bush that looks like a leopard may actually be a leopard! From the perspective ufologists and those of us with the time to stare up at clouds on spring mornings,  it means that we see shapes in seemingly unusual places that we associate with real life objects.

Joy Crisp, a project scientist from NASA’s JPL told reporters yesterday that “Clearly, it [the rock] results from, you know, a lot of things like wind erosion and mechanical abrasion and breakdown chemical weathering of the rocks, as to why they get these weird shapes,”

In an odd but predictable twist to this story “@RealMarsRat” can now be found micro-blogging on twitter.

Curiosity is about to start it’s long journey to the base of Mount Sharp, a martian mountain that reaches 3.4 miles into the Martian Sky. NASA scientists are hoping to find more signs of liquid erosion as they study a region that they hope will be rich in visible sedimentary layers. Curiosity has already found striking evidence for ancient stream beds on Mars and conditions that could have suited microbial life in Mars’ past.